The first map started very aggressively: both teams were taking risks and were regularly attacking the opposite sides. Following the results of the first ten minutes, Tuho had a minimum advantage. By the 20th minute, the advantage had grown, but a few successful fights made by HR set the diagrams to zero. Unfortunately, Tuho managed to seize the initiative again and, as a result, win.

The second map started with HellRaiser slowly gaining an advantage. A decisive fight took place at the 25th minute, which Tuho lost. The game itself ended 10 minutes later in HR's favor.

The third map was the most difficult. By the 20th minute, the teams had been managing to keep the diagrams at zero and not to risk too much. However, right after that HellRaisers started to rapidly gain an advantage. Not only did the successful moves of Tuho save them from losing, but they also gave them hope for a comeback. Nevertheless, it didn't happen — an excellent combination performed by our players in a crucial fight on their base let them win this match. 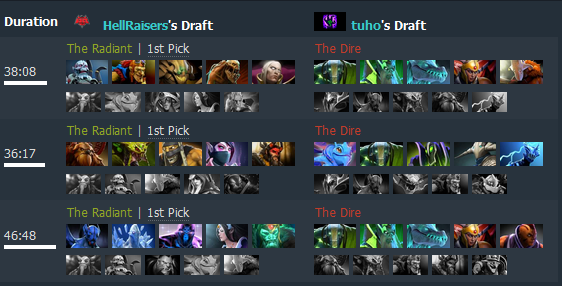