The first map started with PENTA seizing the initiative right away. They managed to draw the first blood and set the pace of the game. Although HellRaisers tried to turn the tide, PENTA were only getting stronger by each fight, and eventually they were the one winning the first map.

The second map followed the opposite scenario. HR this time started the game confidently. It was seen that the enemy's plan was destroyed. By the 25th minute, PENTA had found strength to fight back, having leveled the balance a little, but the followed fight resulted in PENTA losing the second map.

The third map turned out to be longer. The teams were figuring out who would control the map for almost half an hour. With PENTA eventually getting the advantage, the game became faster and a few blood fights, in which most heroes died, happened. At some point the opponent managed to catch a few heroes of our team, entered the ramp and finished the game on the followed try. 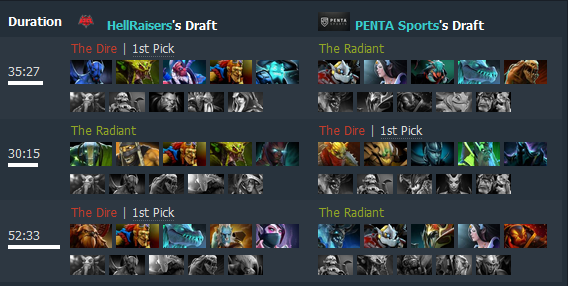