The first opponent in the group stage was team Binary Dragons. The battleground was Cache. As soon as the match started, the organizers had to make a technical pause, which took a while. When the pause ended, HellRaisers started as the attacking side and had a quite good first half. Despite a lost pistol round, they managed to take almost all buy rounds and by the side switching they had earned 11 points. The opponent tried to win back in the second half, though HR stopped the comeback in time and won with a 16.10 score.

The second game ran against the Australian Renegades team. With Mirage chosen to be the place of action, HellRaisers started on the defensive side and that beginning was rather tough — the team had lost a series of rounds. Luckily, the HR players managed to pull themselves together and win the first half, though with a minimum advantage. The game wasn't going smoothly in the second half, the teams were seizing the initiative by turns. A few small mistakes by HellRaisers let the Australians take the lead and realize their advantage by turning it into a 14:16 victory. 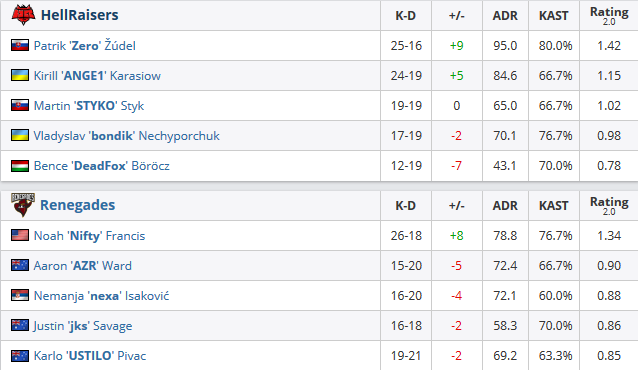