The first map was Cache where our team started on the defensive side which didn't run perfectly. The Polish team successfully forced a fight right from the first rounds, and the entire first half was full of trades. The side switching took place at a 8:7 score in HellRaisers' favor. In the second half, HellRaisers rapidly gained an advantage, though they couldn't close out the game at once. Although VP were desperately trying to get to the overtime, the first game ended with a 16:13 score.

The third map was Mirage. Our team started on the attacking side and the beginning ran rather well. The HR players managed to rapidly take the lead and earn some advantage, but closer to the side switching VP returned in the game and turned the tide. The side switching happened with a 9:6 score in favor of the Poles. In the second half, Virtus.pro got a second wind and they took almost all clutch rounds. The final result of the meeting is 2:1 in VP's favor. 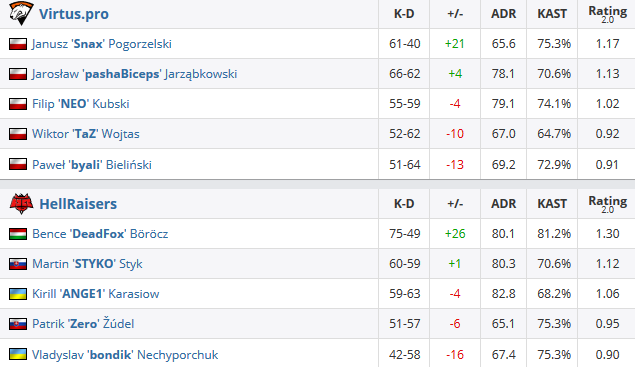 You can find the coverage of Adrenaline Cyber League 2017 on our website.