The UMP-45 was being buffed for a long time, and thus it became one of the most used weapons in the game. Professionals preferred this submachine gun to the Famas or Galil. For its efficiency, the community called the gun a $1200 rifle. Many people kept the UMP-45 even in buy rounds, understanding it could compete with the rifles.

The German submachine gun naturally needed a nerf, and operation "Hydra" has finally reduced the power of this monster. The developers have dedicated the UMP-45 only one line, which could easily be missed if read rapidly:

The UMP-45 used to kill an enemy with the armor with one headshot from about 1035 units, which is ~25 meters, after rangemodifier was reduced, its range capability has decreased to 585 units, or ~15 meters. Basically, the effective range has decreased by 40%! The graph below shows the changes made (1 meter equals about 40 units). 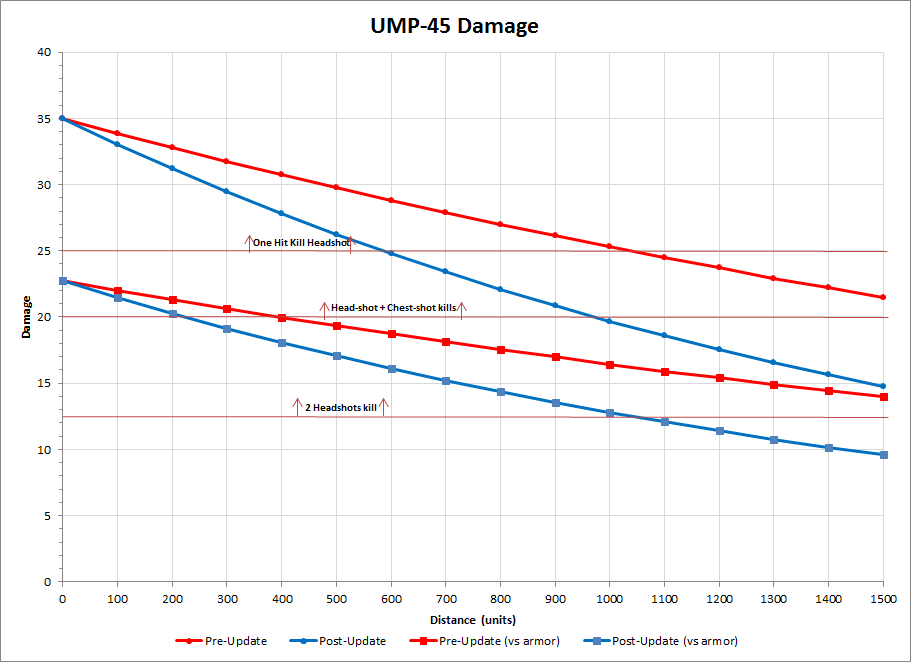 Can we say that operation "Hydra" has buried the UMP-45? Hardly. The German SMG will still remain one of the cheapest and the most efficient submachine guns in the game, which perfectly suits for farming, since the kill reward is twice as much as the standard $300.

Although Valve have managed to take the UMP-45 down a peg, having deprived it of the rifle's effectiveness on range, it still is a nice gun on close and sometimes middle ranges, but it's not good enough on range anymore — it now noticeably loses to the Famas and Galil. It should be understood that the UMP-45 has no opponents in its class, though. Neither the MAC-10, nor the MP9, nor the MP7 can compete with the UMP-45's price and quality.

In summary, it can be said that the UMP-45 is far from leaving the matches. Its spray is easy to control and the kill reward is significant. Indeed, it can compete with the Famas and Galil on close range. The UMP-45's era isn't over yet.