Home / News / HR No right for mistake: HellRaisers to fight for the playoff

No right for mistake: HellRaisers to fight for the playoff 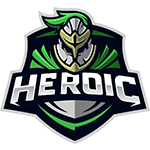 Our team had two games yesterday: a victory over the Brazilians from LG with a 16:8 score, and a loss to Gambit (7:16). We're going to have a decider for advancing out from group A today. The opponent is Heroic. The Danes played only one meeting against Gambit yesterday and lost Train in a series of additional rounds (23:25). The team has confidently beat Luminosity today and is ready to fight our players.

The last double meeting of these two teams took place within ESL Pro League Season 5 and brought both teams a victory: HellRaisers lost to Heroic on Mirage (12:16), but destroyed the Danes on Train with a 16:6 score. Our rival didn't have much time to prepare for today's meeting, but it doesn't make the Danes less dangerous. Nevertheless, motivation isn't something HellRaisers lack, either. We've come here to win.

You can find the coverage of DreamHack Open Austin 2017 on our website.