Home / News / HR HellRaisers make it to the decider

HellRaisers make it to the decider

The first map of the evening was Overpass where HellRaisers started on the attacking side. After a rapid beginning HellRaisers faced a strong defense in buy rounds. HR managed to find gaps in the enemy's defense only at the end of the first half, and thus the score was 8:7 in the rival's favor. Team Spirit picked up momentum in the second half and started earning points. HellRaisers couldn't  build a solid defense and lost the first map with a 12:16 score.

HR began the second map on the defensive side. HellRaisers managed to show their strength on Nuke again. In the first half, Team Spirit hardly managed to take five rounds thus having provided themselves a needed minimum for the second half. However, that didn't help them — after the side switching HellRaisers gave no chance for a comeback. A series of six rounds let our team win the second map with a 16:5 score.

Cobblestone, the third map, started with the CT side for HR. The first round was taken by Team Spirit, but right in the force one HellRaisers took the lead and seized the initiative which they managed to keep until the end of the half. Our enemy managed to win only four rounds on the attacking side. The second half started with a victory of TS in a pistol round again, but the first device one dotted all the "i"s. HR seized the initiative and confidently won the third map. 2:1. 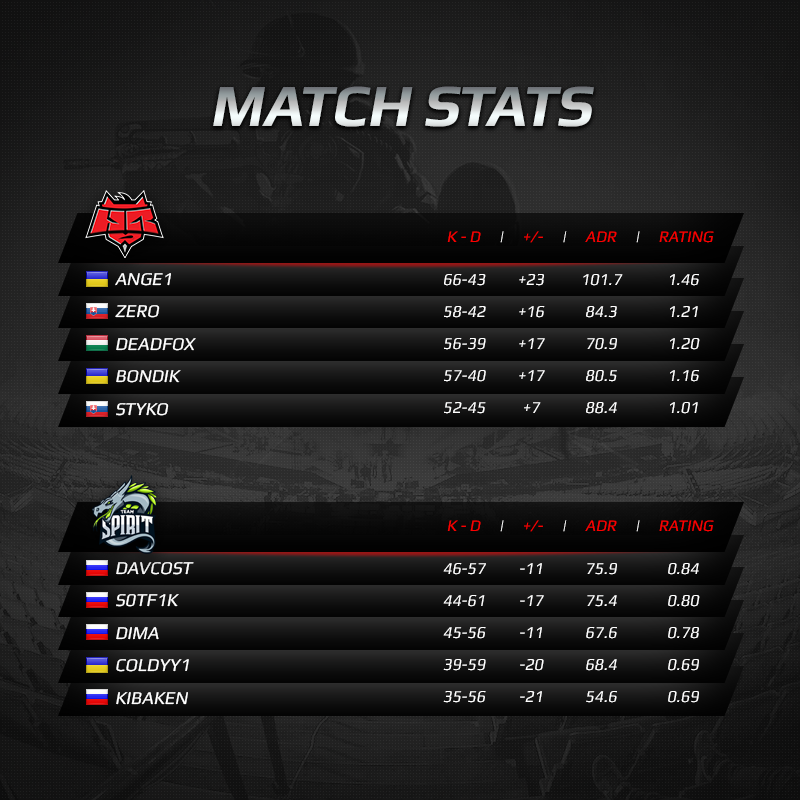