You've been waiting for them for almost two years, and here they are, the new HellRaisers stickers! They're confined to ELEAGUE Major 2017 — a very important tournament for us.

ANGE1 and Co. have successfully qualified for the major and now are ready to offer a fight to the best teams of the competitive CS:GO world. It would have been much more difficult for our players without your support, so they took the creation of the personal stickers as seriously as possible and provided their best autographs. Now you can attach the HellRaisers stickers on any of your favorite skins and show everyone you support HellRaisers! 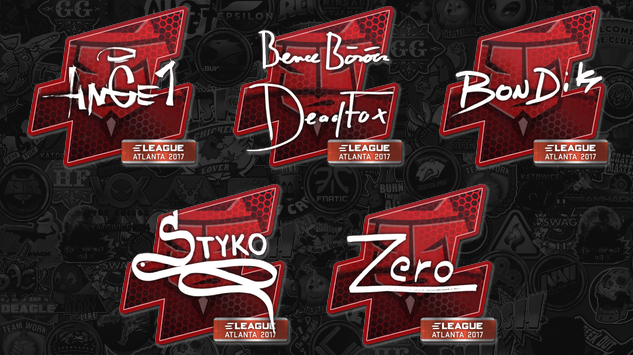 You can get the stickers in the in-game store. They're available in three variants such as common, holo and foil. Common stickers can be found in the main CS:GO menu by clicking the buy stickers button at the top of the screen. After that you'll see 16 team logos, by clicking any of which you'll be able to buy any sticker you want. Moreover, ELEAGUE Major is the first tournament featuring the graffiti with logos of the participating teams. They can be purchased in the very same menu. A price of each offer is $0,99!

And if you want to become on owner of a holo or foil sticker with the logo of your favorite team or an autograph of a player, then you'll have to try your luck. Capsules with stickers cost $4,99, and they are in the second part of the in-game store. There are 4 different capsules available at such a price — two with the logos and autographs of teams with the «Legend» status, and the remaining two are for teams and players that have made it in the major through the qualifiers.

Don't miss an opportunity to decorate your arsenal of weapons with unique stickers of HellRaisers from ELEAGUE Major 2017 and thus to support your favorite team!