HellRaisers vs OpTic. More than an important match

HellRaisers and OpTic have come to the final day of ELEAGUE Major Main Qualifier having two victories and a loss.

The North American team looks very confident at the qualifiers. Thus, they've defeated the Chinese from TyLoo, and then Ninjas in Pyjamas. Both battles ended up with a 16:9 score. Before the fight with the Swedes, OpTic did misstep in a match with FaZe, though our today's rival looks particularly dangerous anyway.

The road to the decisive qualifiers turned out to be fruitful for OpTic. Our opponents have surprised the whole esports world, having taken the gold at ELEAGUE Season 2. Having got such a boost of confidence, this opponent can show a phenomenal level of the game, so the match must be taken as seriously as possible. 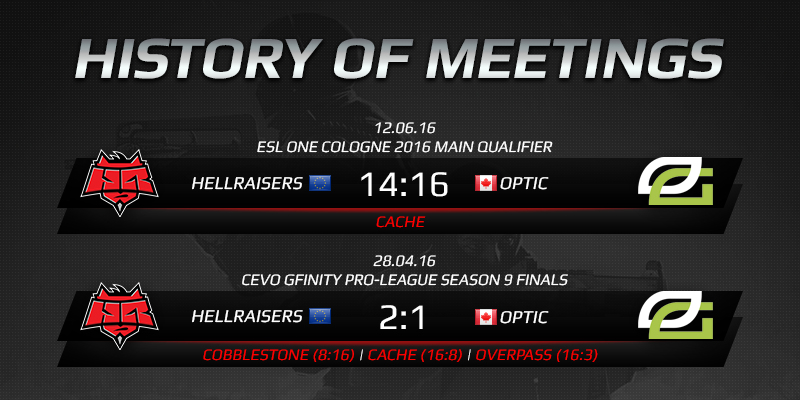 It's been half a year since the last meeting. Today, the situation looks like a déjà vu — both teams are going with a 2:1 score. The tournament fate of HellRaisers and OpTic is to be decided today: one will go to the Major, while another will have to prove that he's worth being at ELEAGUE Major by playing the decisive match.

We lost to OpTic half a year ago. Today they seem much stronger. However, our players have made huge work on themselves, too. We'll see how it turns out.