After such an intensive match against Ninjas in Pyjamas, our players have to get into the fight against the Swedes again, but this time from team GODSENT. Our rival has come to the final qualifiers not being in its best shape. A failure at ESEA Premier Season 23 Europe at the beginning of December left the team with no chances to make it in EPL Season 5, and before that GODSENT hadn't managed to reach the offline finals of ECS Season 2, either.

Nevertheless, the team's performance at ELEAGUE Major Main Qualifier has been rather confident so far. Both opponents of the Swedes such as G2 and Dignitas were defeated with the same score of 16:11. The favorite maps of GODSENT are Mirage (22 games and 66% of victories), Train (16 games and 75% of victories) and Cache (8 games, 7 of which ended with a victory). 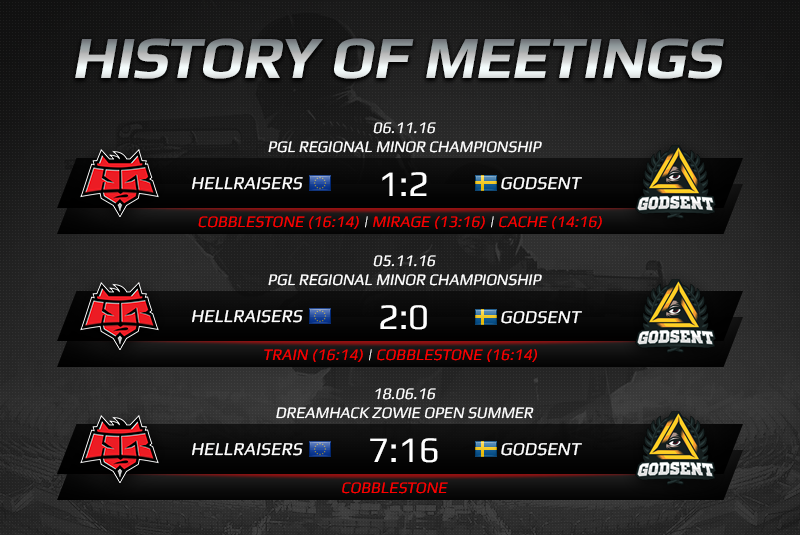 The upcoming meeting will be one of the most awaited battles of not only the third match day, but of the tournament in general, since last time the teams met each other within PGL Regional Minor Championship where four out of five maps ended up with a 16:14 score in favor of one of the teams, while the Swedes were the one celebrating the victory in the match-up. HellRaisers made certain conclusions and continued their preparation, having shown at this tournament they're capable of beating any rival, even the most well-known one.

We're sure that this time we'll see an even more spectacular meeting. A winner will be able to breath out, since a fight for reaching ELEAGUE Major will end with a victory for such a team, while a loser will have to continue fighting for the dream.