It's been a tough day for HellRaisers. Our team has played five matches in a row, having won each of them. Besides easy matches, there were serious battles, too, such as games with USSR (16:12) and Fnatic.Academy (16:12). However, HellRaisers have managed to turn the tide in the decisive meeting against the Swedes and confidently got a slot in the closed European qualifiers for DreamHack Masters Las Vegas 2017. 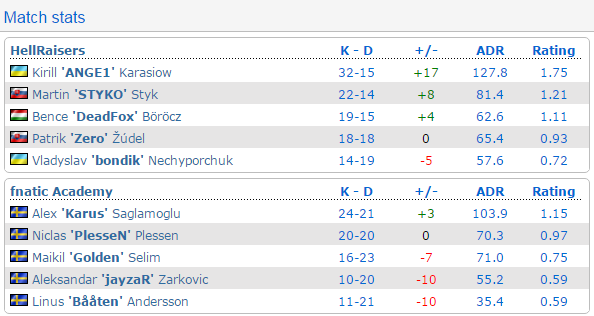 Final score of the meeting against Fnatic.Academy

Our players will continue fighting for Las Vegas on 9 January 2017. There four teams, which will represent Europe to fight for $450,000, will be found.

The coverage of DreamHack Masters Las Vegas 2017 Open Qualifier is available at the following link.