The EPICENTER: Moscow group stage has come to an end: our players have taken the fourth place in the group and ended their participation in this tournament. As we've said before, there is the final stage of the European minor coming, where HellRaisers will show their best, but this is not the subject of this article. There's no time to get upset due to the results of the Moscow tournament, and no one will do it — today we've got a very cool event! Are you excited already?

HellRaisers are ready to define the strongest player on the team, and alongside with that find a new owner of the coolest skin ★ StatTrak™ Butterfly Knife | Slaughter (factory new), which has been kindly provided for the prize fund by our partners Hellcase. As you might have already understood, the strongest one will be defined through the use of the aim tournament, in which four players of HellRaisers will take part. Unfortunately, the captain won't be able to play in this small tournament because of his sickness.

Do you want to get such a knife for just a few clicks? Click here and open a case! 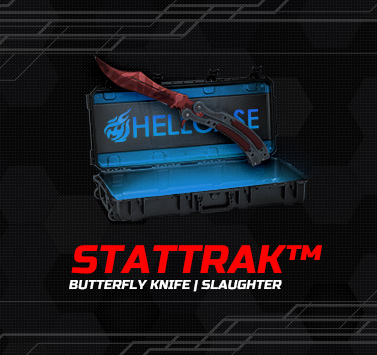 The tournament's system is simple, but at the same time isn't very common. All members of the team will start the tournament from the group stage where they'll have round-robin games, or more simply everyone will play against everyone. Thus, all the players will need to play four matches against their teammates on aim_map. A winner of the best-of-one matches will be the players winning 16 rounds first.

After all games in the group stage of our aim tournament powered by Hellcase, rounds won by each player will be counted. Two leaders by points of the group stage will proceed to the final, which will be played in a best-of-three format on the very map, with the very rules. A player that will win two maps out of three in the series will become the winner of the tournament and will get the main prize of this competition ★ StatTrak™ Butterfly Knife | Slaughter (factory new) by Hellcase.

You can watch the event on our Twitch channel, and also on streams on Facebook and Periscope. Make sure you've subscribed to our social media to stay tuned!