Home / Articles / HR How to find a perfect resolution for CS:GO. Tips from pro's

How to find a perfect resolution for CS:GO. Tips from pro’s

Settings have been a specific matter of preparation since Counter-Strike 1.6. When Counter-Strike: Global Offensive came out, professional players kept their usual settings, and many of them play with a classic 4:3 aspect ration to this day.

Such an approach definitely has its disadvantages. At the past IEM Katowice 2018,

Robin "flusha" Rönnquist, even though the latter was very close. Obviously, it wasn't only tunnel vision getting in the way, but also an aspect ratio.

When choosing an aspect ratio, you need to consider a few things. The first one is performance at 4:3 will be better, thus if you need to have more FPS, you should stick with 4:3.

The second thing is the overall amount of information: the bigger the view angle is, the more information a player will need to process. If a player is confident enough in his play and map reading, then the additional view angle might rarely come in handy, as happened to

The third one is models being visually wider at a 4:3 ratio, but this is fair enough for an image with no black bars. Indeed, changes are pretty minor and barely help aim.

Besides an aspeсt ratio, there's also the resolution which can vary from 640х480 (the smallest) до 1920х1080. The bigger the resolution, the more your graphic card will be loaded, which results in lower FPS. You also need to consider the monitor's refresh rate while calculating your FPS.

Most players have vertical synchronization off, so their FPS are twice as much as the refresh rate. This is needed for the image to be as smooth as possible. Accordingly, if performance isn't good enough, then you need to lower your graphic settings and resolution. 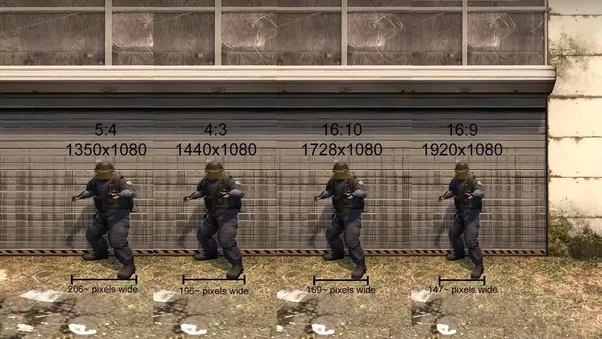 It's noteworthy that there are fewer details at lower resolutions. Thus, you can get rid of useless details by lowering the resolution, though do not go too far. We've asked players of our team and found out what their preferences are.

"I use 1280х960 with black bars. Considering the fact that I have all settings set to low, I can clearly see at a long distance. It's worse when the resolution is lower. This is a personal preference in the first place. I think that you can now find pro players with any resolution".

We should mention only Effect Detail and Shader Detail here since these two settings directly affect gameplay as proven by 3kliksphilip.

With Effect Detail and Shader Detail set to high, smoke from the Molotov draws in such a way that it's easier to see it through at a long distance but harder at close range. On the other hand, low settings make the Molotov give almost no smoke at all, though visibility gets worse at a long distance.

Moreover, you can change the number of objects on a map by changing Shader Detail. You can check it out here.