Why do professionals choose CZ75-Auto?

February 12 of 2014, Weapon Case 3 was added to the game, featuring the CZ75-Auto. It was the first automatic pistol in the entire series. The CZ75-Auto took the P250's place as the most popular purchasable pistol, which happened on December 10 of 2014.

Four years later since the CZ75-Auto was added to the game, it is still the most powerful purchasable pistol and the fifth best weapon by efficiency in professional games. Despite its disadvantages such as a low-price kill reward and a slow draw animation, the Czech pistol is very popular. Kills with this weapon are made more often than with the UMP-45 or M4A1-S. 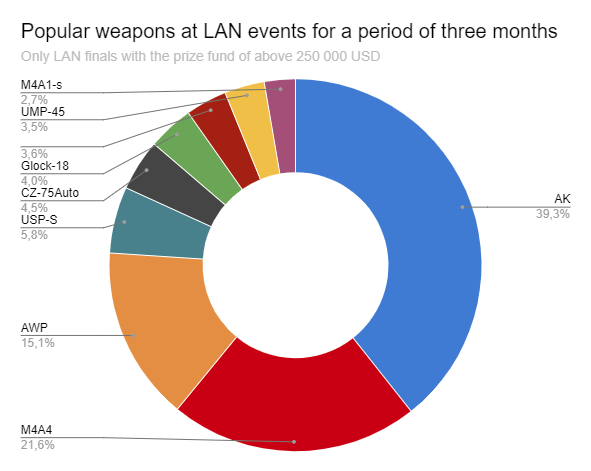 In order to understand why the CZ75-Auto is so popular, we need to look at its stats. By spending $500, a player receives a weapon that is able to compete with the M4A1-S.
Let's compare, these two guns have the same rate of fire, 600 rounds per minute, while it takes less time to reload the CZ75-Auto, which 2.7 seconds against 3.1 seconds, and you get higher movement speed. On the other hand, the M4A1-S has a bigger magazine capacity, which is 20 bullets against 12, has better wall penetration and is more efficient at longer distances.
The main advantage of the CZ75-Auto is its price. It's more than six times cheaper than the rifle and is nice for forced buy rounds. Using the UMP-45, which is somewhat more expensive, but has a bigger magazine capacity and a doubled kill reward, is also a questionable decision.
Headshots deal about four times more damage than body shots. The chart below has the damage threshold for first-hit kills marked as the red dotted line. Also, 100 units equal 2.54 meters. 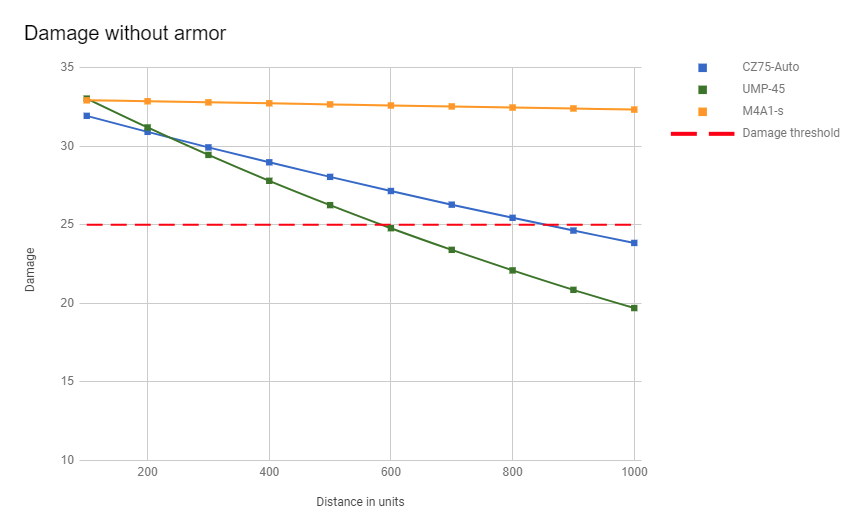 Vladislav "bondik" Nechiporchuk's comment:
"Every gun has its pros and cons. As for the CZ75-Auto, it's its rate of fire that automatically allows you to become a killer at close distances. You can feel comfortable at middle distances, as well, though you'd want to avoid long-distance fights. The pistol is often used in eco rounds and is perfect for close positions, you can easily and fast take a couple enemies down".
While shooting at targets with no armor, the M4A1-S has a definitive advantage, since it can kill an enemy with a headshot at a long distance. However, its price can hardly allow getting it in forced buy rounds. The UMP-45 is superior to the CZ75-Auto only at close distances, up to 300 units (~7.62 meters) and up to 600 units (~15.24 meters). It's obvious that this SMG is much more preferable in anti-eco rounds, though it's not worth getting it against a buy round of the enemy. 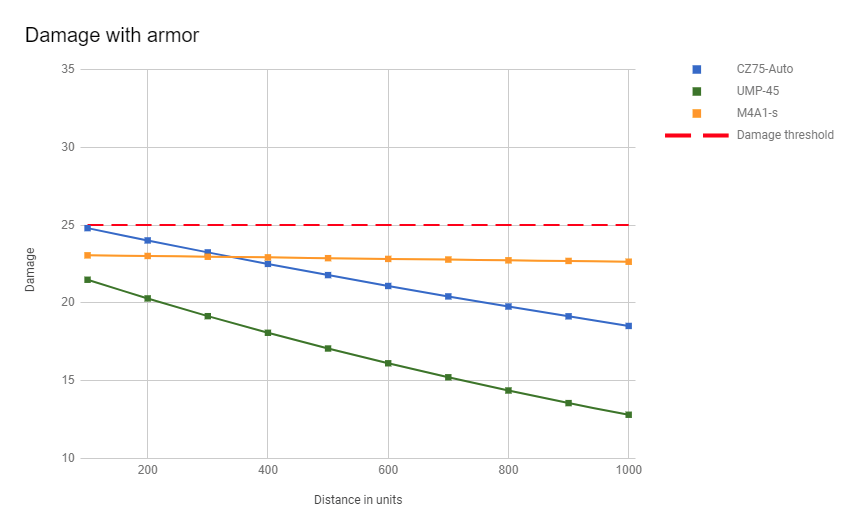 The situation is different when shooting at enemies with armor: none of the three weapons can't kill with a headshot. Even the more popular M4A4 can't handle this, let alone the FAMAS and Galil. The CZ75-Auto is better than the M4A1-S by damage at close distances, which, at the same rate of fire, can bring a victory in a duel.
Player of team HellRaisers

Kirill "ANGE1" Karasiow's comment:
"The CZ75-Auto is basically a FAMAS with 12 bullets. The recoil control is worse, but you can spray while running with pretty good accuracy.  If you learn to one tap, then you can easily win duels against automatic guns at middle-long ranges".

At a distance of 300 units, the roles change and the M4A1-S becomes stronger. However, considering that both the weapons don't kill with a headshot, then there remains parity of a up-to-720-units (~19 meters) distance. This is the range the CZ75-Auto can kill with a headshot and a body shot at. It's worth noting that at such a distance, the UMP-45 loses its knock-down power and requires at least two headshots to kill. 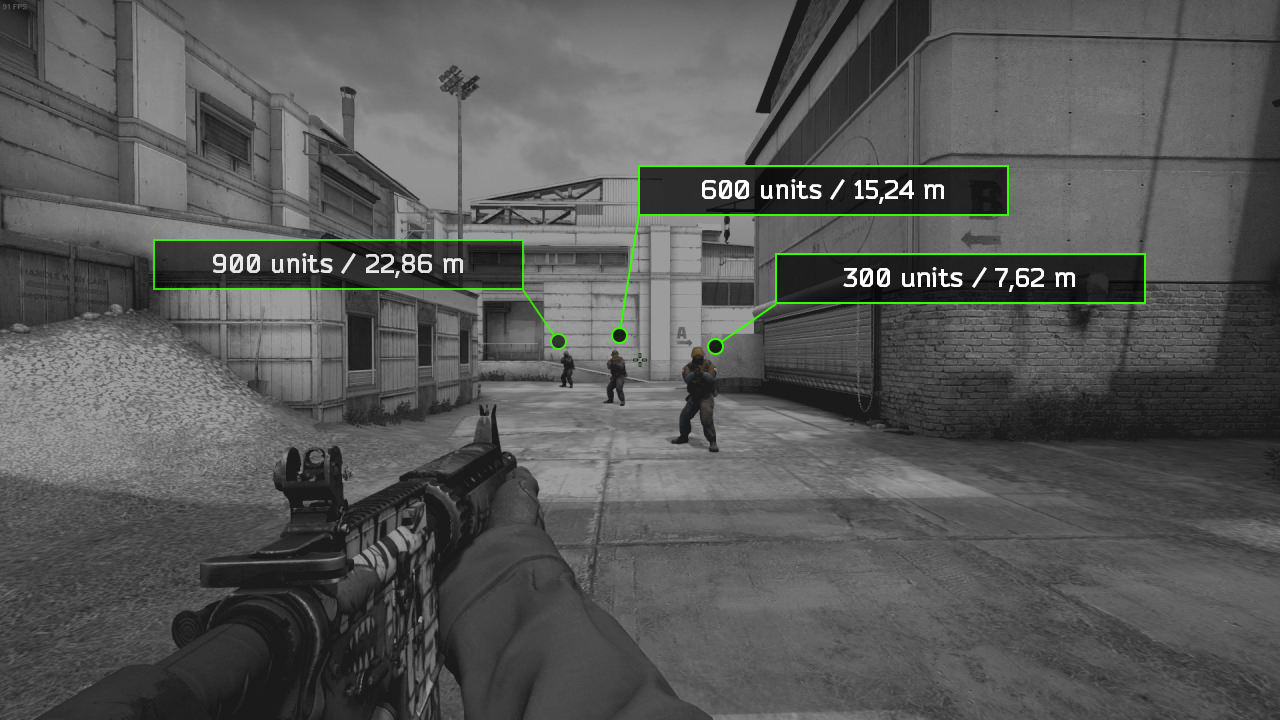 Thus, the CZ75-Auto is the most powerful weapon at a close range. You can kill fast at a distance up to 19 meters. The CZ75-Auto performs well in forced buy rounds: after buying the pistol, you should still have enough money to get armor and helmet.

I still think CZ shouldn’t be in the game. No reason for a automatic pistol on my opinion

The CZ75-Auto is also a good alternative for the Galil and FAMAS. While losing to these rifles at long distances, the Czech pistol is cheaper and has bigger damage in close-range confrontations, which is up to 300 units (~7.62 meters).
The CZ75-Auto is a budget version of the M4A1-S for $500. With good personal skills and an ability to choose positions for close fights, this gun's disadvantages stop to matter. So, the CZ75-Auto is a choice of professional players.