Are pistol rounds key to success?

The pistol rounds have always been paid more attention to, since not only is it the first round in each half, but winning it also gives you advantage for the next rounds. How big is the advantage? Should we consider the pistol rounds crucial?

Statistics will help answer this question. The information is based on the results of the first halves of 1955 maps played in 2017 by the top 30 teams, according to hltv.org. It's noteworthy that only the CT side first halves were considered, since in this case all 15 rounds were played. 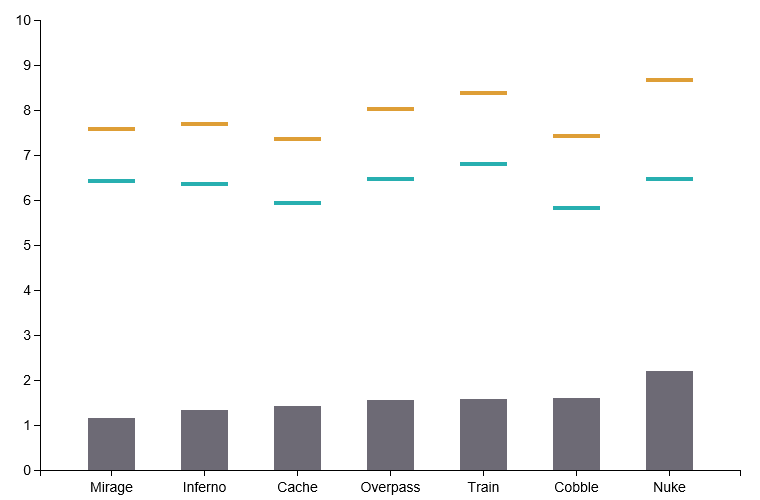 The orange line shows the average number of rounds won (from 2 to 15) on the CT side in case of winning the pistol round, the blue one in case of losing. The grey bars show the difference in rounds. The source is stayinpit.gg.

The statistics appears to be equal, taking into account seven maps of the current tournament map pool. Only two maps can be highlighted such as Mirage and Nuke. A victory on the first map will usually bring only one more round, while winning the pistol round on Nuke will give the team almost two and a half rounds. It's rather interesting, since both the old and new Nuke's are considered a CT-sided map, but according to the statistics it's so only in case of CT winning the pistol round.

All the other maps such as Inferno, Cache, Overpass, Train and Cobblestone are on about the same level and give the winner of the pistol round 1,5 more rounds as a bonus. One more statistical conclusion is the map orientation: Cobblestone and Cache allow the attacking side to take enough rounds even in case of failing the pistol one.

The conclusions are simple and clear: on average a pistol rounds bring 1,5 additional points. For most maps, this small advantage, at best, will secure a victory in the first map, and only on Nuke, the pistol round might change the course of the whole map.